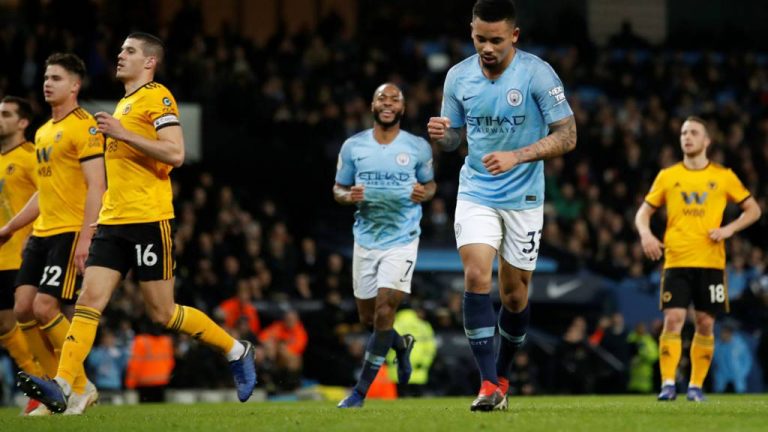 Manchester City received the Wolves for the 29th game of the Premier League.

The Citizens are leader of the Championship with 12 points in advance on the other Manchester’s club before the game. And the Skyblues want to take their 21th win in a row. They also want to win United of 15 points before their today’s game.

They are very diligent at the beginning of the match. As they always get the ball, they put pressure on the Wolves’s defence with their placed attacks. The Wolves broke at the 15th minute after a great pass of Rodri on Mahrez who, with a great control, made a cross that Dendoncker push in his own goal. After that, the Citizens continue to take the possession and Wolverhampton has huge difficulties to create some occasions. The score could be higher for City. But the VAR refuse the goal of Laporte for an offside of some millimetres.

After the break, the Skyblues don’t manage to score, even if they have a lot of opportunities. Wolverhampton score at the 62nd minute after a free kick by Moutinho and Connor Coady score a header. But that goal doesn’t reflect the game. After that Wolverhampton take back the control of the ball but only for a little time. Gabriel Jesus delivers his teammates by taken a cross from the Wolves.

After that, City really want to guarantee the victory. They finally to do it at the 90th minute when Mahrez score with a beautiful shoot. It came after a loss of the ball in the defence by the Wolves. Jesus scored a second goal at the last minute of the game after well following a shoot of Gundogan.

Manchester City is really going to win a 3rd Premier League in 4 years. It seems that no other team can debate with them.